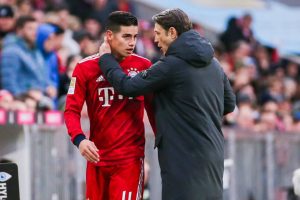 “James went back to training, everything is fine”: Niko Kovac

The coach of Bayern Munich gave a piece of tranquility about the Colombian player, who could not be in the weekend game.
Last Thursday James David Rodriguez could not finish the training session with Bayern Munich due to a problem in the adductor, according to his coach, the Croatian Niko Kovac, who could not count the Colombian soccer player for Saturday’s game for the 30th day. of the German League, that the Bavarian club won 1-0 at Werder Bremen.

This Monday, in press conference, Kovac gave a part of tranquility on the physical state of the player and of other of his companions. “Mats Hummels and James Rodriguez have returned to training camp today, everything is fine,” said Bayern Munich strategist, who on the Austrian side David Alaba said: “He has trained individually in the gym.”
It is not the first time that James suffers muscular problems since his arrival at Bayern Munich, the club that leads the Bundesliga with 70 points, one more than Borussia Dortmund and nine ahead of Leipzig, with four games remaining. In the next, on Sunday April 28, the square in which Rodríguez will face Nuremberg.