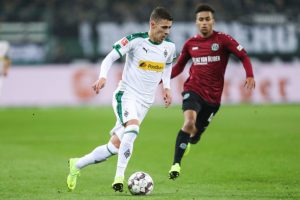 Last Saturday, RB Leipzig won away from home 1-2 against Borussia Monchengladbach. Both teams came to win their last game. Borussia Monchengladbach came into the match with reinvigorated spirits after defeating Hannover 96 away from home. On the part of the visiting team, RB Leipzig won in their last two matches of the competition against Wolfsburg in their fiefdom and Bayern Leverkusen at home, 2-0 and 2-4 respectively and accumulated 4 wins in a row in the competition. With this good result RB Leipzig is third at the conclusion of the match, while Borussia Monchengladbach is fifth.
The match started favorably for the visiting team, who was debuting his scoring account with a goal from Halstenberg at 17 minutes. After this, the first half ended with a result of 0-1.

The second period started unbeatable for the visiting team, which increased the locker with another goal from Halstenberg, who scored a double in the 53rd minute. However, the Mönchengladbach team after 61 minutes cut distances thanks to Plea’s goal. finishing the game with a score of 1-2 on the scoreboard.

The two teams exhausted all their changes. At Borussia Monchengladbach Hofmann, Wendt and Traoré came in to replace Neuhaus, Raffael and Herrmann, while the visiting coach brought in Poulsen, Haidara and Orban for Matheus Cunha, Forsberg and Werner.

The referee showed two yellow cards to RB Leipzig (specifically Haidara and Poulsen), while the home side did not see any.